From the openSUSE Wiki page:

“The Pantheon shell is the main desktop component of the Elementary project. It is deeply integrated with other applications like the dock called Plank, the top panel Wingpanel, application launcher Slingshot and comes with its own window manager Gala, which is based on Mutter.

The traditional substitutability of components is sacrificed by a design philosophy that streamlines the user interface for better global aesthetics and out-of-the-box experience inspired by popular proprietary desktops. To do that, the Elementary project enhances the Gtk+ libraries with its own extensions for improved usability and a unique design. It also comes with its own set of programs that all adhere to the visual guidelines like the text editor Scratch, the file browser Pantheon Files, the web browser Midori, the terminal emulator Pantheon Terminal, the desktop calendar Maya, the e-Mail client Geary, as well as the Switchboard control panel. To simplify application creation designed for Elementary, an application development framework (Granite) was created. The preferred programming language is Vala.”

Pantheon is provided to Sparky as a 3rd party desktop, and uses a 3rd party repositories, which lets you install the desktop in two ways:

1. Fresh install - using Sparky MinimalGUI/CLI iso images. Running the Minimal ISO, launch Sparky Advanced Installer and follow the installation process which lets you install one of 20 about desktops, including Pantheon.

Due to incompatibly on Sparky 5 / Debian testing “Buster”, this desktop has been removed from installation list of Minimal iso images.

2. Sparky APTus - the Desktop tab provides an option which lets you install one of 20 about desktops, including Pantheon, alongside an existing desktop. 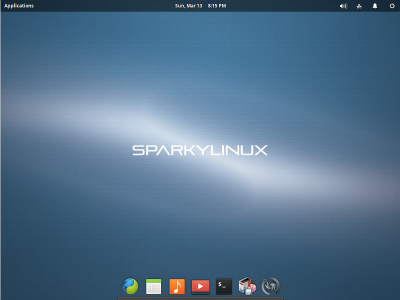 The Pantheon desktop packages and repos are 'maintained by gandalfn and is available here: http://gandalfn.ovh/