Sparky Desktop is an additional, separate module to Sparky APTus 0.3.0 and above. It installs about 25 different desktops with one click.

All the desktops will be installed with Sparky settings (wallpaper, icon set, theme, sparky core packages, etc.). It will also make some small changes to the personal settings of an already installed desktop.

Make sure your package list is up-to-date before starting any installation. The desktops need many dependencies so if your new desktop installation fails, please report it in the Sparky forums. 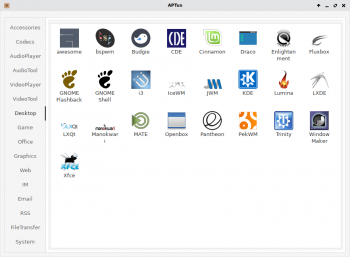